Discerning the Effects and Benefits of Ṭawwaf

Here we bring to bear discoveries about our physical world, about the pattern of forces at work on the surface of our earth and throughout the planet, as related to the geographical location of Makkah/ the Kâ’bah. As residents of the modern, science & technology-dominated world, we here suggest physical sources for subtle, beneficial effects on the human body, intrinsic to performing Ṭawwaf as a form of worship in the precise location of Makkah. Spiritual health and physical health are meant to complement one another.

This notion of physical benefits resulting from the performance of Ṭawwaf has arisen from the observation that the Kâ’bah can be viewed as the geographical centre point of the world’s land mass. 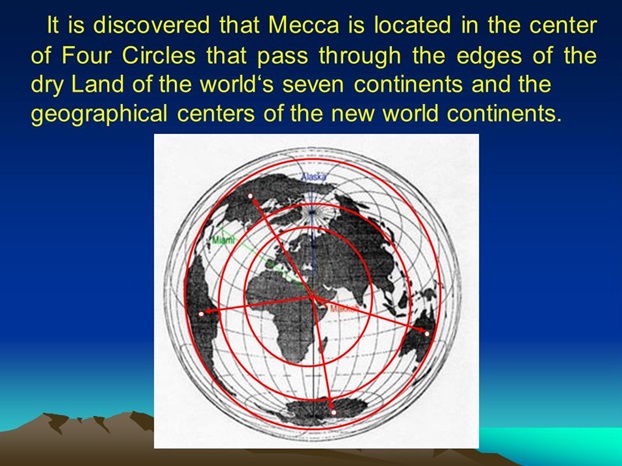 Does this location suggest that the centre point of the earth’s land mass has unique, measurable characteristics? Maybe. But that is not all.

Secondly, it is said to have been reported that a significant level of short-wave energy rises from the earth, as detected by measurements taken during a space mission. According to a controversial interview on the MEMRI TV Project, this radiation of short-waves was reportedly emanating from the geographical location of the Ka’bah[i] and registered from a position straight upward in the earth’s atmosphere. From the point of view of Science, we would want, of course, a thorough study of this claim.

We know that the earth’s North and South Poles roughly coincide with the ends of the axis around which the earth revolves. A bi-polar magnetic field exists along this North-South axis; in fact, this same bi-polar magnetic field can be demonstrated in iron bar magnets anywhere on earth.  But are there other planet-wide systems of electromagnetic energy —or other, as yet unexamined, perhaps even un-named, forms of energy— which can impact the well-being of life on the earth’s surface, more so at certain points than at other points? 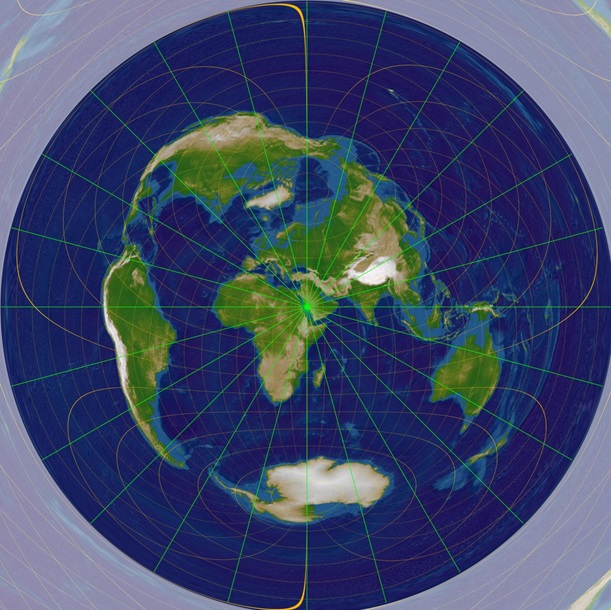 Is Ṭawwaf a ‘technique’ somehow congruent with the very physical nature of the Creation, specifically with that of our home planet and its centre of geographical dry land mass? Is Ṭawwaf a technique for tapping into, or magnifying the spiritual blessing held out to us from Allah, deriving from a Hajj experience at the Ka’bah?  Does the performance of Ṭawwaf  serve to open up one’s sensitivity of nearness to Allah?  And for that matter, similarly, is the mandated ‘procedure’ of Ṣalat another format for more readily aligning oneself —at any place on earth—into renewed submission to the Creator?  Possibly.  What is, for sure, given to us in Islam is practical guidance on the Straight Path.  Ṭawwaf and Ṣalat are two ancient ritual forms of worship[ii] purified from idolatry and re-established from time immemorial through Prophet Muhammad (ﷺ) for the benefit of mankind.

…the way of Allah and the masjid  [that is] inviolable —which He made  for all people alike … And [recall] when We appointed the site of the House for ‘Ibrâhîm: [We said to him], “Do not associate anything with Me, and purify My House for those who circumambulate the House (ṭawwaf) and those who stand, and those who bow and prostrate. And proclaim the pilgrimage (ḥajj) to the people. They will come to you on foot and on all [kinds of] lean camels. They will come from every distant pass —so that they may witness benefits for themselves and remember the Name of Allâh … Then let them circle round the Ancient House [in ṭawwaf].” [Surat Al-Ḥajj, 22:18, 25-29]

We are told that Adam established the first place of worship on earth. We also know that the structure standing at the centre of worship on the site of the present-day Kâ’bah has been rebuilt[iii] repeatedly, notably by ‘Ibrâhîm and Ismâ’îl (Surat al-Baqarah, 2:127).  In time, Makkah would become an ideal location as a trading centre since it was considered a ‘holy’ place, a safe haven from fighting.  But by pre-Islamic times, the practice of Ṭawwaf around the Kâ’bah had been grossly corrupted[iv] with pagan perversions of the ritual.  Just as Prophet Muhammad cleansed the House of the Kâ’bah of its pagan idols, so also he purified and re-instituted the rites of Hajj, which included the seven circuits of Ṭawwaf.

We know the correct rites of Hajj from the example of the Prophet, which are in brief:

“…Allah’s Messenger (ﷺ) circumambulated (the House) when he came to Mecca: He first kissed the corner (of the Kâ’bah containing the Black Stone), then ran in three circuits out of seven and walked in four circuits. And then when he had finished the circumambulation [Ṭawwaf] of the House, he observed two rak’ahs of prayer [Ṣalah] at the Station (of Ibrahim), and then pronounced Salâm (for concluding the rak’ahs); and then he departed and came to al-Safa’ and ran seven times between al-Safa’ and al-Marwa….” (Sahih Muslim 1227; Book 7 Hadith 2832)

Here are some questions commonly asked concerning the special status of the Kâ’bah and  concerning Ṭawwaf specifically:

When these questions were asked to Islamic scholars and ‘Ulama (Certified Scholars) they gave replies from the angle of Shari’ah but they could not provide answers in a scientifically satisfactory way. Our purpose here is to try to lessen those gaps using our current knowledge of the physical world so as to satisfy the sensibilities of modern man.

Concept 1: The Kâ’bah is at the Centre of the Earth

As presented earlier in this article, the geographical center of the earth’s dry surface land mass can be pin-pointed to the location where the present-day Kâ’bah now stands. 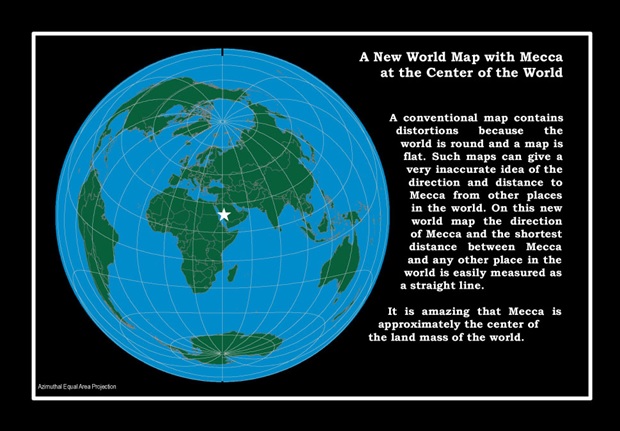 Furthermore, it seems that the Ka’bah sits on a geological formation with an unusual short-wave emission possibly giving it extra-ordinary natural physical properties.  This may be related to why this location has a divine history:

Truly, the first House appointed for the people was that [in the valley of] Bakkah[v] the Blessed —and [a source of] guidance for all the worlds. [Surah Âli ‘Imrân, 3:96]

The specific location, in what is now the city of Makkah, of the House rebuilt by Ibrâhîm and his son Isma’îl, is significant historically and spiritually because of:

And [remember] when his Lord tested Ibrâhîm by words [of command] and he fulfilled them? He said, “Truly I make you a leader of the people.” And he said, “Of my seed [as well]?” He said, “My Covenant does not include the oppressors.” …And [remember] when We made the House to be a refuge for the people and a safe haven. “Take the Station of ‘Ibrâhîm as your place of prayer.” And We made a covenant with Ibrâhîm and ‘Ismâ’îl: “Purify My House for those who walk around it and those who cling to it and those who bend in prostration.”

And [remember] when His Lord said to him, “Surrender!” and he said, “I am one of those who have surrendered to the Lord of the World.”  And it was this very thing that Ibrâhîm enjoined upon his sons and Ya’kûb as well, saying, “My sons! Allah has chosen for you this dîn [religious way of life], so see that you do not die except that you are muslims [those who have surrendered themselves to Allah].”

And he said, “Of my seed [as well]?” … And Ibrâhîm said, “My Lord, make this land a safe haven and provide its people with fruits, such of them who believe in Allah and the Final Day.” …  And [remember] when Ibrâhîm and Ismâ’îl raised up the foundations of the House, [saying]: “Our Lord, accept this from us. Truly You are the Hearer, the Knower. Our Lord, make us surrender to You, and from our seed a community that is surrendered to You, and show us our ritual ways and turn to us. Truly You are the oft-Returning, the Singularly Compassionate.  Our Lord, raise up from them a messenger, one of them, who will recite Your Signs to them and teach them the Book and the Wisdom and purify them. Truly You are the Almighty, the Wise.” [Surat Al-Baqarah, 2:124, 126-129, 133]

And who abandons the creed of Ibrâhîm except an insolent fool [seeing that] We chose him [Ibrâhîm] in this world, and truly in the Final World he is among the wholly righteous? [Surat Al-Baqarah, 2:130]

Behold, We have inspired thee [O Prophet] just as We inspired Noah and all the prophets after him – as We inspired Abraham, and Ishmael, and Isaac, and Jacob, and their descendants, including Jesus and Job, and Jonah, and Aaron, and Solomon; and as We vouchsafed unto David a book of divine wisdom; and as [We inspired other] apostles whom We have mentioned to thee ere this, as well as apostles whom We have not mentioned to thee; and as God spoke His word unto Moses: [We sent all these] apostles as heralds of glad tidings and as warners…  (Surat al-Nisâ’, 4:163-165)

The above ayah 3:96, specifying Bakkah as “the Blessed,” indicates that Allah had already chosen or created this world-central site to become a source of divine guidance for all peoples, provided through the descendants of Ibrâhîm.

[ii] In the Biblical book of Genesis, chapter 28, we find the story of how Jacob (Ya’kûb) obeyed his father, Isaac (Ishâq), in returning to the ancestral homeland of his grandfather Abraham (Ibrâhîm) to marry his maternal cousin. Thereupon,  Jacob’s brother, Esau [in keeping with his father’s disapproval for him to marry a local girl in Palestine], went to his is paternal uncle Ishmael (Ismâ’îl) —in what would have been Arabia— to marry Ismâ’îl’s daughter, his cousin.

Thus the descendants of Ibrâhîm’s two sons Ismâ’îl and Ishâq intermarried with each other, even though they had been separated geographically due to the jealousy of Ishâq’s mother.

In the Quran we have the story of Ibrâhîm and Ismâ’îl rebuilding the ancient House of God at the site of the present day Ka’bah;

In the Bible we find the story of Ya’kûb, Ismâ’îl’s nephew, having an awe-inspiring meeting with God and memorializing that experience by establishing his place of worship. When Ya’kûb woke up from his experience he said: “The Lord is here! He is in this place, and I didn’t know it!”…It must be the house of God; it must be the gate that opens into heaven.”

We do not know from the Bible how much interaction the two half-brothers had with each other after their initial separation —only that at the death of their father, they joined together to bury him.  What the Biblical narrative  indicates for our purposes is that Ismâ’îl’s brother, too, established his own “house of God,” a place dedicated to worship for Banî Isrâ’îl and the giving of a proportion of his possessions [i.e., zakat]. This was before the building of the Temple in Jerusalem.

[iv] Ibn Kathir writes the following in his Tafseer about the corrupted practice:

The Arabs, with the exception of the Quraysh, used to perform Tawaf naked. They claimed they would not perform Tawaf while wearing the clothes that they had disobeyed Allah in. As for the Quraysh, known as al-Hums, they used to perform Tawaf in their regular clothes. Whoever among the Arabs borrowed a garment from one of al-Hums, he would wear it during Tawaf. And whoever wore a new garment, would discard it and nobody would wear it after him on completion of Tawaf. Those who did not have a new garment, or were not given one by al-Hums, would perform Tawaf while naked.  Women would also perform Tawaf while naked, usually at night. This was a practice that the idolaters invented on their own, following only their forefathers in this regard. They falsely claimed that what their forefathers did was in fact following the order and legislation of Allah. (https://hajjumrahplanner.com/tawaf/)

Why Some Jews Supported Prophet Muhammad And Others Didn’t

Was Jesus Crucified? A Rabbi’s View