SUICIDE: Islam as its Panacea

In a week following after the declaration of India’s Telangana Board XII Class result on 18 April 2019, 22 students committed suicide. Similar news keeps coming as soon as the Board Exam results are declared across the States’ Boards in India and beyond. As per the National Crime Records Bureau, every hour a student commits suicide in India and on an average 45 farmers commit suicide every day. Many celebrities, successful businessmen, politicians and bureaucrats keep making headlines every now and then for suicide related news.

The World Health Organization (WHO) estimates that each year approximately one million people die from suicide, which represents a global mortality rate of 16 people per 100,000, or one death every 40 seconds. It is predicted that by 2020 the rate of death will increase to one every 20 seconds.  It is further reported that in the last 45 years suicide rates have increased by 60% worldwide. Suicide is now among the three leading causes of death among those aged 15-44 (male and female). Suicide attempts are up to 20 times more frequent than completed suicides. Mental health disorders (particularly depression and substance abuse) are associated with more than 90% of all cases of suicide.

However, suicide results from many complex socio-cultural factors and is more likely to occur during a period of distress. The reasons for suicide varies from failure in exams, marital discord, dowry related issues, love affairs, unemployment, financial bankruptcy, among many others. In high income countries suicide is multiple times more than gun-related homicides.

When it comes to why these suicides are happening, we tend to focus on tangible (material) aspects of it and ignore abstract (spiritual) aspects. It must be deliberated, in the public sphere, why, when a normal person can go to any extent to save his / her life, what in the world forces one to take one’s own life? It must be contemplated why suicide is not as big an issue among the poor as compared to those who are materially accomplished and have more avenues to enjoy life? It must be questioned what makes a person love death more than life? It also must be recognized, in this world with all its present technology and progress, why it is unable to tame this horrible phenomenon? It must be explored why suicide is more frequent among non-religious people than among religious people? 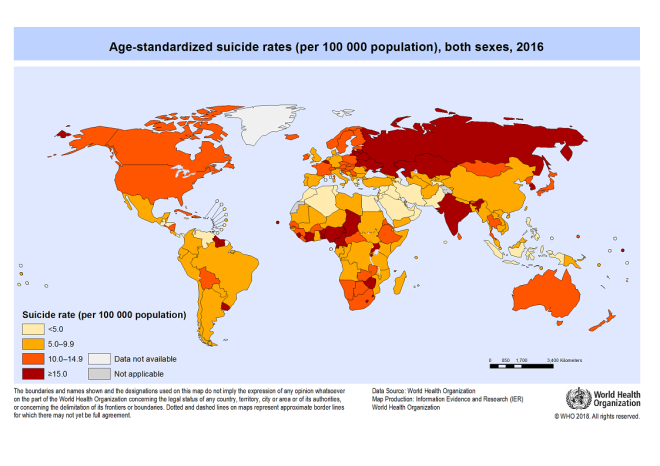 We have to first recognize that the root of this problem is not materialistic but rather spiritual; in all cases the individual at high risk for suicide is the person with a ‘sinking’ heart, generally as an outcome of sustained and chronic depression. Since this problem is not physical, it cannot be solved by medicines or surgery but rather by deliberate attention that takes the sinking heart to positivity and hopefulness. Such sustainable thoughts of positivity and hopefulness can only be provided by faith in Allah.

Unfortunately, the present world order run by the ideology called ‘capitalism,’ in effect, recognizes only what is seen and can be touched, thus ignoring the spiritual aspect. The neglect of moral, humanitarian and spiritual aspects causes many problems, like negativity, identity crisis, depression and suicidal thinking. Even in the event that the prevailing ideology does recognize these non-material aspects partially, there is no proper ecology to help address such issues.

One such attempt to counter the suicide trend was when the Technical Board of India realised that a large number of engineering students were committing suicide as if they didn’t understand the value of human life; so it included a subject called ‘Human Values’ in the curriculum of Engineering Studies. But they found that teaching human values alongside with Darwinian theory (promoting atheism) and in the absence of eternal accountability was going in vain.

Other solutions proposed to solve this issue, such as helpline numbers and counselling, was not helping either as the rate in suicide was gradually rising. So we can conclude that the present world order, largely dominated by. capitalism and its prevailing cultural notions has no solution to the epidemic rise of suicide in the world.

As a spiritual alternative to prevent suicide, Islam has its ways of addressing the issue. First of all, researchers show that suicide rates interestingly appear to be lower among Muslims as compared to those of other faiths, or to atheists, those claiming to adhere to no faith. Researchers have attributed the lower rate, among other causes, to the Muslims’ religion, i.e., . to the teachings of Islam.

Belief in Allah makes one conceptualize that Allah is the disposer of all affairs, saying, “I am in accord with His commands and prohibitions when I fulfill my needs.” Thus whenever a Muslim encounters overwhelming issues in life such as financial loss, or betrayal, or failure, he transfers the responsibility for this trial to Allah ( ﷻ ),saying, ‘Allah is my lord’, or, ‘This trial is from Allah.’ Thereby his own burden— in that it comes from the All Powerful— becomes a completely normal part of his life. By contrast, a disbeliever in Allah thinks, “I myself am the disposer of all my affairs,” so that when testing times come and he falls short in handling life issues, then he burdens himself beyond his capability to bear it. Such burdens keep mounting as time passes and more problems stack up against him, thus leading to an intolerable burden on himself. This burden leads to frustration, depression, a ‘sinking’ heart and ultimately to suicide.

Islam also gives a sense of purpose in life. Since Allah (ﷻ) has created the whole universe, as well as us humans, we are designed to look out for that inherent sense of purpose. But when an individual doesn’t find that purpose of life, there is a void in the heart. This void creates restlessness, such that an individual tries to find his contentment of heart in women (or men), in games, in maximizing pleasure with premier leagues and gambling; unfortunately, it doesn’t get satisfaction anywhere because Allah (ﷻ) says:

“Verily in the remembrance of Allah do hearts find rest.” [Surah Âl ‘Imrân, 3:28]

But the problem is that capitalism has come to brand religion as a source of backwardness and as unscientific, encouraging disbelievers to view belief in God as an encroachment on their freedom. So, when the human being tries to be smarter than God, it proves to be suicidal for him or her, both figuratively and literally.

This remembrance of God takes one to the Quran, which says,

‘In the mutual competition of this world you have forgotten (Allah) until you return to your graves.’ (Surah Al-Takâthur,102:1-2)

Here mindless competition has been cautioned. As soon as a baby is born, parents force kids into the competition of run – run – run; otherwise you will be left behind. Thus the child is not given any chance to realise why he/she is running at all. This is when the concept of rizq (sustenance) comes in handy: that you will get only what has been wisely decreed by Allah for you, thus relieving your soul of unnecessary stress and giving you a sense of contentment.

The belief that “Allah loves me more than my mother does” also makes one feel hopeful that whatever Allah decides for me is best for me. The concept of self-examination makes us satisfied with whatever situation we are in, whether we are born disabled or healthy, whether poor or rich.

Lastly, Islam makes suicide prohibited (harâm), so that even if Satan whispers in the heart of Muslims, Islam’s prohibition dispels the Satan away from such manoeuvres. In fact, the Prophet (ﷺ)also issued a stern warning against suicides. He said,

“Whoever kills himself with something in the world, he will be punished with the same on the Day of Judgment.” (Bukhari & Muslim)

Thus, Islam indicates that one is always capable to be sustained in whatever calamity befalls him in life. Also, Allah promises,

In short, Islam protects the sanctity of human life through its teachings and practical solutions. It urges the distraught to avoid despair and to try their utmost to get out of their doldrums through simultaneously putting their trust in Allah (ﷻ).

Dr. Abrar Ahmad is Assistant Professor in the Department of Electrical Engineering, at Jamia Millia Islamia, New Delhi—having taught there since 2013 and previously at other institutions in India beginning in 2003. Active in research (renewable energy and energy conservation), he has been a regular participant in national and international conferences since 2010, many of which he has organized; furthermore, he has published nearly a dozen papers in international professional journals. Dr. Abrar is presently doing research focused on the Impact of Religious Values in Promoting Energy Conservation. A full detail of his professional work is available at: https://bit.ly/3dy135c He has written extensively in the areas of ‘Islam and the Environment’ and ‘Islam as a Solution to Human Problems.’ He has also delivered lectures on such topics in India, Indonesia, Malaysia, and the U.K. (Cambridge University). Prof. Ahmad is available for lectures related to his interests and can be contacted at aahmad15@jmi.ac.in, or at whatsapp +91-9818493010.

The Mother of All Spiritual Maladies | Abu Hamid al-Ghazali

Between Hope and Despair | Umar Masud