Five Things You Need to Know About Al-Aqsa

THE LAST COUPLE of weeks have seen daily demonstrations and confrontations between Israeli forces and Palestinians in the occupied Palestinian territories.

Tensions have risen in occupied East Jerusalem’s Old City after Israel shut down Al-Aqsa Mosque compound for the first time since 1969, after a deadly gun battle between Palestinian citizens of Israel and Israeli forces.

The attack, which took place on July 14, ended in the deaths of two Israeli police officers and three Palestinian attackers. Israel subsequently closed the site for Friday prayers and reopened it the next Sunday with new measures of control, including metal detectors and additional cameras, at the compound’s entrances.

Palestinians have been refusing to enter the compound until Israel removes the new measures, which are being seen as the latest move by Israel to impose control and Judaise the city. They have been praying outside the gates in protest for more than a week.

During Friday prayers on July 21, thousands of Palestinians came out to pray in the streets outside of Lion’s Gate, one of the entrances to the Old City. Tensions raged after peaceful demonstrations were violently suppressed by Israeli forces, resulting in hundreds of injuries. Four Palestinians have so far been shot dead in occupied East Jerusalem and the West Bank, one of whom was shot by an Israeli settler.

The following is a breakdown of why the al-Aqsa Mosque compound is a constant point of contention in the Palestinian-Israeli conflict. 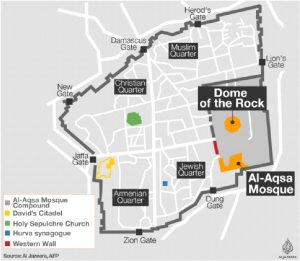 1. What is Al-Aqsa Mosque compound and why is it important?

Al-Aqsa is the name of the silver-domed mosque inside a 35-acre compound referred to as Al-Haram Al-Sharif, or the Noble Sanctuary, by Muslims, and as Temple Mount by Jews. The compound lies in the Old City of Jerusalem, which has been designated a World Heritage site by the United Nations cultural agency, UNESCO, and is important to the three Abrahamic religions.

The site has been the most contested piece of territory in the Holy Land since Israel occupied East Jerusalem, including the Old City, in 1967, along with the West Bank and Gaza Strip. However, the conflict dates even further back, to before the creation of Israel.

In 1947, the UN drew up a partition plan to separate historic Palestine, then under British control, into two states: one for Jews, mainly from Europe, and one for Palestinians. The Jewish state was designated as 55 percent of the land, and the remaining 45 percent was for a Palestinian state.

Jerusalem, which houses al-Aqsa compound, belonged to the international community under the administration of the UN. It was granted this special status for its importance to the three Abrahamic religions.

The first Arab-Israeli war broke out in 1948 after Israel declared statehood, capturing some 78 percent of the land, with the remaining areas of the West Bank, East Jerusalem and Gaza coming under Egyptian and Jordanian control.

Israel’s increasing encroachment on the land intensified in 1967, after the second Arab-Israeli war, which resulted in the Israeli occupation of East Jerusalem, and eventually the illegal Israeli annexation of Jerusalem, including the Old City and Al-Aqsa.

The illegal Israeli control of East Jerusalem, including the Old City, violates several principles of international law, which outlines that an occupying power does not have sovereignty in the territory it occupies.

Over the years, the Israeli government has taken further steps towards controlling and Judaising the Old City and East Jerusalem as a whole. In 1980, Israel passed a law that declared Jerusalem the “complete and united” capital of Israel, in violation of international law. Today, no country in the world recognises Israel’s ownership of Jerusalem or its attempts to change the geography and demographic makeup of the city.

Palestinians in Jerusalem, who number around 400,000, hold only permanent residency status, not citizenship, despite being born there – in contrast with Jews who are born in the city. And since 1967, Israel has embarked on a quiet deportation of the city’s Palestinians by imposing difficult conditions for them to maintain their residency status.

Israel has also built at least 12 fortified Jewish-only illegal settlements in East Jerusalem, housing some 200,000 Israelis, while rejecting Palestinian building permits and demolishing their homes as punishment for building illegally.

For Muslims, the Noble Sanctuary hosts Islam’s third holiest site, the Al-Aqsa Mosque, and the Dome of the Rock, a seventh-century structure believed to be where the Islamic Prophet Muhammad ascended to heaven.

Jews believe the compound is where the Biblical Jewish temples once stood, but Jewish law and the Israeli Rabbinate forbid Jews from entering the compound and praying there, as it is considered too holy to tread upon.

The compound’s Western Wall, known as the Wailing Wall to Jews, is believed to be the last remnant of the Second Temple, while Muslims refer to it as Al-Buraq Wall and believe it is where the Prophet Muhammad tied the Buraq, a [celestial] animal upon which he ascended to the sky and spoke to God.

Since 1967, Jordan and Israel agreed that the Waqf, or the Islamic trust, would have control over matters inside the compound, while Israel would control external security. Non-Muslims would be allowed onto the site during visiting hours, but would not be allowed to pray there.

But rising Temple movements, such as the Temple Mount Faithful and the Temple Institute, have challenged the Israeli government’s ban on allowing Jews to enter the compound, and they aim to rebuild the Third Jewish Temple in the compound.

Such groups are funded by members of the Israeli government, though it claims a desire to maintain the status quo at the site.

Today, Israeli forces routinely allow groups, some in the hundreds, of Jewish settlers who live in the occupied Palestinian territories to descend on the al-Aqsa compound under police and army protection, stirring Palestinian fears of an Israeli takeover of the compound.

In 1990, the Temple Mount Faithful declared it would lay a cornerstone for the Third Temple in place of the Dome of the Rock, leading to riots and a massacre in which 20 Palestinians were killed by Israeli police.

In 2000, Israeli politician Ariel Sharon entered the holy site accompanied by some 1,000 Israeli police, deliberately reiterating Israeli claims to the contested area in light of then Prime Minister Ehud Barak’s US-brokered peace negotiations with Palestinian leader Yasser Arafat, which included discussions on how the two sides could share Jerusalem. Sharon’s entrance to the compound unleashed the Second Intifada, in which more than 3,000 Palestinians and some 1,000 Israelis were killed.

And most recently in May, the Israeli cabinet held its weekly meeting in tunnels below al-Aqsa Mosque, on the 50th anniversary of the Israeli occupation of East Jerusalem, “to mark the liberation and unification of Jerusalem” – a move that infuriated Palestinians.

Israel already restricts Palestinian entry into the compound through several methods, including the separation wall, built in the early 2000s, which restricts the entry of Palestinians from the West Bank into Israel.

Of the three million Palestinians in the occupied West Bank, only those over a certain age limit are allowed access to Jerusalem on Fridays, while others must apply for a hard-to-obtain permit from Israeli authorities. The restrictions already cause serious congestion and tension at checkpoints between the West Bank and Jerusalem, where tens of thousands must pass through security checks to enter Jerusalem to pray.

The latest measures, including the new metal detectors, are seen by Palestinians as part of Israel’s efforts to impose further control on the site, and are a violation of the freedom to worship, protected under international law, according to experts.

President Mahmoud Abbas recently announced that the Palestinian leadership had frozen all contact with Israel due to the growing tensions at Al-Aqsa compound, saying relations would not resume until Israel removed all security measures.

Tensions have been simmering near Al-Aqsa for the past two years. In 2015, clashes broke out after hundreds of Jews tried to enter the mosque complex to commemorate a Jewish holiday.

A year later, protests also erupted after visits by Jewish settlers groups at the compound during the last 10 days of Islam’s holy month of Ramadan, in contravention of tradition.

Most clashes in the compound have occurred because of Israeli settlers trying to pray within the compound, which directly violates the status quo.

Over the last two weeks, Israeli forces fired live ammunition, tear gas and rubber-coated steel bullets at Palestinians demonstrating against the imposed measures, including the barring of Muslim men under the age of 50 from the holy site.

Following the recent events, Israel has deployed 3,000 Israeli police and border police units around the compound.

Al-Aqsa is just a small area within Palestine, but it is a symbolic part of the conflict between Israelis and Palestinians.

Though the mosque itself is significant for Muslims especially, even Palestinian Christians have protested against Israeli encroachment on the compound, joining Muslims in prayer outside of Lion’s Gate on Friday.

“The issue of Al-Haram Al-Sharif stands as a symbolic, but very strong catalyser of the routine of injustice and oppression that Palestinians in Jerusalem are facing, and that causes a continuous eruption of popular anger and uprisings,” Yara Jalajel, a former legal adviser to the Palestinian minister of foreign affairs, told Al Jazeera.

Recent clashes near Al-Aqsa compound have also led to protests and violence throughout the West Bank and Gaza.

With more restrictions placed on Palestinian access to the compound and ongoing calls by Israeli religious groups to allow Jews to pray at the site, many Palestinians fear a possible division of the compound.

The Waqf stated on Wednesday that the longer Israel delays the removal of the new measures, the worse the situation will become.