The researchers concluded that the evolutionary model was full of gaps and weaknesses and that the unique origin model, where humanity arose from one single couple with created diversity, seems to explain data at least as well, if not better.  (https://bio-complexity.org/ojs/index.php/main/article/view/BIO-C.2016.3/BIO-C.2016.3)

“Adam and Eve have not been disproven by science, and those who claim otherwise are misrepresenting the scientific evidence.” (https://www.discovery.org/m/2019/01/Science-and-Human-Origins.pdf, p. 121, para. 2)

Dog breeding is another example of how interbreeding can lead to defects rather than advantages. Great Danes, bred for their large size, have bodies too large for their hearts and are prone to develop bone cancer.  (https://www.housemixblog.com/2017/12/19/is-there-proof-god-exists/, Section on Evolution)

Bulldogs —bred to have large heads— have breathing, skeletal and skin problems; and even worse, many can’t naturally mate and need their puppies to be delivered by Cesarean section. (https://www.nationalgeographic.com/news/2016/07/bulldogs-dogs-animals-science-breeding/, para. 13)

We have no idea what the structure of a primitive cell might have been. The simplest living system known to us, the bacterial cell…in…its overall chemical plan is the same as that of all other living beings. It employs the same genetic code and the same mechanism of translation as do, for example, human cells. (https://tinyurl.com/t37nd4v, p. 123) 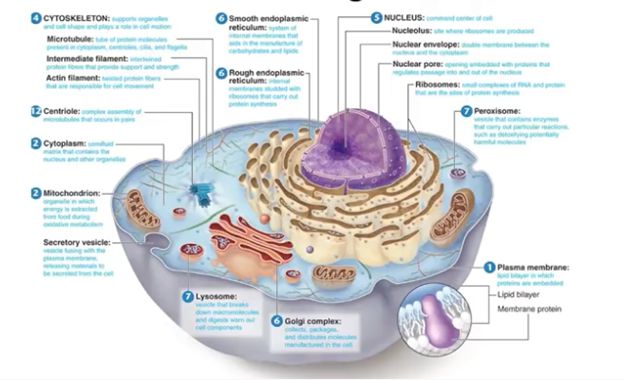 Figure 2: Complexity in the cell

Moreover, how did the instinct for survival come about without a creator?

Why would dead, unfeeling chemicals attach a value to “survival” or care whether they or their products survive or not?

How can chemicals “teach” their products to choose survival?

If the driver for all speciation is the ability to survive, and if creatures are valued in accordance with their fitness for survival, then why do we value a human being over an e-coli bacteria —which has also survived admirably?

New terms started to make their way into evolution literature such as:

So natural selection became “guided” and “constrained”— no longer “random.”

Stephen Gould is an American paleontologist, evolutionary biologist, and historian of science. He was also one of the most influential and widely read authors of popular science of his generation. Gould spent most of his career teaching at Harvard University and working at the American Museum of Natural History in New York. According to him:

“Darwin made a mistake in proposing his natural-selection theory and it is fairly easy to detect the mistake. We have seen that what the theory so grievously lacks is a criterion of survival that is independent of survival.” (Bethell T., Darwin’s mistake, Harper’s 1976; 252:1509 (Feb), p. 70)

This is what is called tautology or circular argument. A tautology is a statement that is always true (by necessity). In the case of Natural Selection this translates to: the fittest survive and those that survive are the fittest. The “how” is what natural selection theory is supposed to provide, and mutually inter-defined terms do not do that. (https://www.ncbi.nlm.nih.gov/pmc/articles/PMC4594354, paras. 9, 16)

Numerous other scientists have also criticized natural selection as a tautology or circular argument, rendering a fatal blow to the theory’s ability to explain the mechanism of biological change.

Early in his career, the legendary philosopher Karl Popper called evolution via natural selection “almost a tautology” and “not a testable scientific theory but a metaphysical research program.” Sir Karl Raimund Popper, 1902-1994,  CH FBA FRS, was an Austrian-born British philosopher and professor, generally regarded as one of the 20th century’s greatest philosophers of science. Attacked for these criticisms, Popper retracted them. But in a 1992 interview, he blurted out that he still found Darwin’s theory dissatisfying: “One ought to look for alternatives!” (https://blogs.scientificamerican.com/cross-check/dubitable-darwin-why-some-smart-nonreligious-people-doubt-the-theory-of-evolution/)

Jerry Fodor of Rutgers University and the cognitive scientist Massimo Piattelli-Palmarini of the University of Arizona in Tucson, in their book, What Darwin Got Wrong, also say that the theory of natural selection is fatally flawed. They cite, among other things, the large role which contingency plays in evolution and the fact that clusters of genes persist unchanged for eons. (What Darwin Got Wrong, Farrar, Straus and Giroux, 2010. https://www.goodreads.com/work/quotes/7726352-what-darwin-got-wrong)

…To be continued in Part 17

Dr. Raida Jarrar is a Palestinian American who holds a Doctorate of Engineering from Cleveland State University. Following a career of over twenty-five years in the fields of engineering and aviation IT, she worked as a volunteer at one of the largest Islamic centers in the Middle East, where she interacted with visitors of different religious backgrounds and diverse cultures. The series she writes for Al-Jumuah analyzes and encapsulates her discussions with the atheist visitors, presented in a question and answer format for clarity and ease of reference. The answers are sourced from research, discussions with colleagues and mentors, and personal thoughts. Dr. Jarrar also volunteers as a translator for Islamic content and hosts the Aslamt youtube channel, which is dedicated to answering common questions about faith. https://www.youtube.com/channel/UCiUK0Tcqdb2GNeoqnxIcXtw