How did life begin?

The question of how life began on Earth cannot be resolved materialistically. This is not a “God of the gaps” excuse (see Part 7), but a valid inference from the observations at hand. It is purely rational to infer that a Creator is involved — in view of:

Our DNA has the code, or instructions, for making proteins, which are the building blocks for our cells. Each protein is made of a chain of amino acids which join together into long chains that eventually fold into a protein. Scientists believe the simplest form of life has a minimum of 250 to 400 proteins, and that each protein is made up of 300 to 400 amino acids (on average). There are 20 known amino acids that make up all of life.

“Over the past sixty years, dedicated and skilful scientists have devoted much effort and ink to the origin of life, with remarkably little to show for it. Judging by the volume of literature, both experimental and theoretical, the inquiry has thrived prodigiously. But unlike more conventional fields of biological research, the study of life’s origins has failed to generate a coherent and persuasive framework that gives meaning to the growing heap of data and speculation; and this suggests that we may still be missing some essential insight.” (Franklin Harold, In Search of Cell History: The Evolution of Life’s Building Blocks, Chicago: University of Chicago Press, 2014, p. 164)

The Nobel Prize-winning molecular biologist Francis Crick, who co-discovered the structure of the DNA molecule said:

“The origin of life seems almost to be a miracle, so many are the conditions which would have had to have been satisfied to get it going.”

If we believe that life emerged accidentally in the primitive environment of the earth and that encrypted genetic blueprints for life showed up without a programmer, then we are attributing complex design and precision to an unconscious, inanimate nature with zero intelligence, zero information and zero creative powers. In other words, we are crediting dumb nature with amazing abilities to think, plan, encrypt, program and execute.

According to Dr. Douglas Axe, Director of Biologic Institute in Seattle, Washington state, and author of the 2017 book, Undeniable: How Biology Confirms Our Intuition That Life Is Designed (Harper One):

To believe in primordial soup is, after all, to believe that a pool of mineral water set a process in motion that ultimately produced not just the genetic instructions carried by every form of Earthly life but also innumerable marvels that go well beyond mere instructions —actual working wonders, like brains and compound eyes and adaptive immune systems and submicroscopic molecular machines, to name a few. (p. 18)

And, according to the English astronomer and Professor of Astronomy at Cambridge University, Sir Fred Hoyle:

“The chance that higher life forms might have emerged in this way is comparable with the chance that a tornado sweeping through a junk yard might assemble a Boeing 747 from the materials therein.” (Hoyle on evolution, Nature, Vol. 294: 105, Nov 12, 1981)

Despite this amazing complexity described by the world’s scientists, ridiculous phrases on the origin of life, such as the below, are fed to the masses, on the media and in textbooks:

On the question of life, atheists are waiting for science to fill in the “gaps” (See Part 7 for “God of the Gaps?”) while they play around with unproven hypotheses. They are denying a Life-Giver in the hope that the future might provide proof for their baseless denial.

It looks like they will be waiting for a long time. On the Scientific American website, there is a 2011 article entitled: “Pssst! Don’t tell the creationists, but scientists don’t have a clue how life began.” In this article, Horgan states that the scientific community still has no clue about the origin of life, as the various hypotheses have intractable issues. (https://blogs.scientificamerican.com/cross-check/pssst-dont-tell-the-creationists-but-scientists-dont-have-a-clue-how-life-began/)

Of course, they won’t have a clue if they ignore the only compelling explanation: that life must come from a Live Creator!

According to Dr. George Wald, a Harvard biologist, and a 1967 Nobel Prize winner in physiology:

“When it comes to the origin of life there are only two possibilities: creation or spontaneous generation. There is no third way. Spontaneous generation was disproved one hundred years ago, but that leads us to only one other conclusion, that of supernatural creation. We cannot accept that on philosophical grounds; therefore, we choose to believe the impossible: that life arose spontaneously by chance!”  (Scientific American, The origin of life, 191:48, August 1954)

Lifeless chemicals cannot originate life. To hypothesize that live cells can come about from aggregations of basic elements ignores the fact that cells have several components which cannot arise without each other. For example, genetic information can be replicated and read out only with the aid of enzyme proteins, which are themselves specified by these same genes. Energy is harnessed by means of enzymes whose production requires energy input. Neither proteins nor nucleic acids could have arisen without the other.

According to Leslie Orgel:

“One might have to conclude that life could never, in fact, have originated by chemical means.” (Leslie E. Orgel, The origin of life on earth, Scientific American, vol. 271, October 1994, p. 78)

Again we quote from Franklin M. Harold. In the conclusion of his 2001 book, The Way of the Cell: Molecules, Organisms and the Order of Life —which describes in detail the incredible complexity of life at the cellular level— therein Dr. Franklin Harold tells us:

“It would be agreeable to conclude this book with a cheery fanfare about science closing in, slowly but surely, on the ultimate mystery; but the time for rosy rhetoric is not at hand. The origin of life appears to me as incomprehensible as ever, a matter of wonder but not for explication.” (p. 251)

The many attempts, during the past decades, to create a simple life form from scratch have failed, despite using the best brainpower in the world, meticulously designed experiments, state-of-the-art laboratories, unlimited financial incentives and an abundance of live models to imitate (models from God’s creation)!

In fact, the whole field of synthetic life research starts with the minimum objective already accomplished: a live cell.

If some say that science did create life, they may be referring to the experiment of Craig Venter, a famous American millionaire. (https://www.ncbi.nlm.nih.gov/pubmed/20488990)

What Venter actually did was to take a living mycoplasma cell with its cell membrane, enzymes and organelles and insert some processed bases inside the nucleus. So, what he did was a project inside a living cell, copying a pre-existing genome—nothing that approximates the creation of a new life form.

“To my mind, Craig has somewhat overplayed the importance of this,” said David Baltimore, a geneticist at Caltech, “He has not created life, only mimicked it.” (https://www.nytimes.com/2010/05/21/science/21cell.html)

“Of course that’s not right—its ancestor is a biological life form.” says Dr. Gerald Joyce, an internationally renowned life scientist at the Scripps Institute in California, “Dr. Venter copied the DNA from one species of bacteria and inserted it into another. The second bacteria made all the proteins and organelles in the so-called ‘synthetic cell,’ by following the specifications implicit in the structure of the inserted DNA.” (https://www.scirp.org/journal/paperinformation.aspx?paperid=97287)

“My worry is that some people are going to draw the conclusion that they have created a new life form,” said Jim Collins, a bioengineer at Boston University. “What they have created is an organism with a synthesized natural genome. But it doesn’t represent the creation of life from scratch or the creation of a new life form.” (https://www.nytimes.com/2010/05/21/science/21cell.html)

The funny thing is that Venter himself said: “We didn’t create life from scratch.” (https://edition.cnn.com/2010/HEALTH/05/21/venter.qa/index.html)

Dr. James Tour is one of the world’s top synthetic organic chemists. He has authored 680 scientific publications and holds more than 120 patents. In 2014, Thomson Reuters named him one of “The World’s Most Influential Scientific Minds,” and in 2018 Clarivate Analytics recognized him as one of the world’s most highly cited researchers. Dr. Tour states that molecules do not move towards life even with a human agency acting upon them (https://youtu.be/zU7Lww-sBPg?t=711). Dr. Tour states that almost every chemical synthesis experiment on origin of life follows the same protocol (https://youtu.be/zU7Lww-sBPg?t=829) as outlined in the list below: 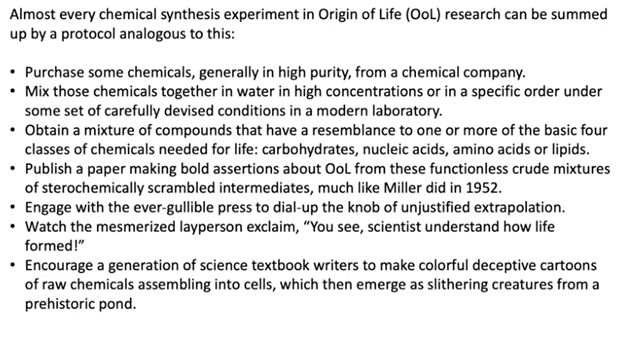 According to Dr. Tour, even if we assume that millions of years can provide an opportunity for a chance spark of life, it doesn’t explain the rest of the story. Did nature keep a record of how it did things to get the initial life spark so that it could repeat the process? Did nature keep a laboratory notebook? Does nature know how to go back to the starting point and repeat the steps? Nature doesn’t know how to start again, why to start again or where it’s going! (https://youtu.be/3EOQZNAmlKk?t=605)

In summary, self-emerging life is an irrational conjecture; a logically impossible deduction that has furthermore proven to be experimentally impossible.

How can we gamble away our life’s end when we have no clue about its beginning?!

In August 2017, Arizona State University announced a 5 million USD prize for anyone who could provide an answer on the origin of life.  (https://s3-us-west-2.amazonaws.com/perry.evolution/frontline_genomics_evolution2.0_perry_marshall.pdf)

When no progress was made, scientists gathered again, towards the end of May 2019, at the Royal Society in London, to double the prize to 10 million USD and reduce the scope of the challenge to the self-organization of chemicals into code.

Thus, God’s challenge in the Quran was passed by evolution scientists to Mankind, but this time with a prize attached!

O people, a parable is set forth; pay heed to it. Those who call upon aught other than God shall never be able to create even a fly, even if all of them were to come together to do that. And if the fly were to snatch away anything from them, they would not be able to recover that from it. Powerless is the supplicant, and; powerless is he to whom [other than God] he supplicates. (Quran 22:73)

…To be continued in Part 15

Dr. Raida Jarrar is a Palestinian American who holds a Doctorate of Engineering from Cleveland State University. Following a career of over twenty-five years in the fields of engineering and aviation IT, she worked as a volunteer at one of the largest Islamic centers in the Middle East, where she interacted with visitors of different religious backgrounds and diverse cultures. The series she writes for Al-Jumuah analyzes and encapsulates her discussions with the atheist visitors, presented in a question and answer format for clarity and ease of reference. The answers are sourced from research, discussions with colleagues and mentors, and personal thoughts. Dr. Jarrar also volunteers as a translator for Islamic content and hosts the Aslamt youtube channel, which is dedicated to answering common questions about faith. https://www.youtube.com/channel/UCiUK0Tcqdb2GNeoqnxIcXtw